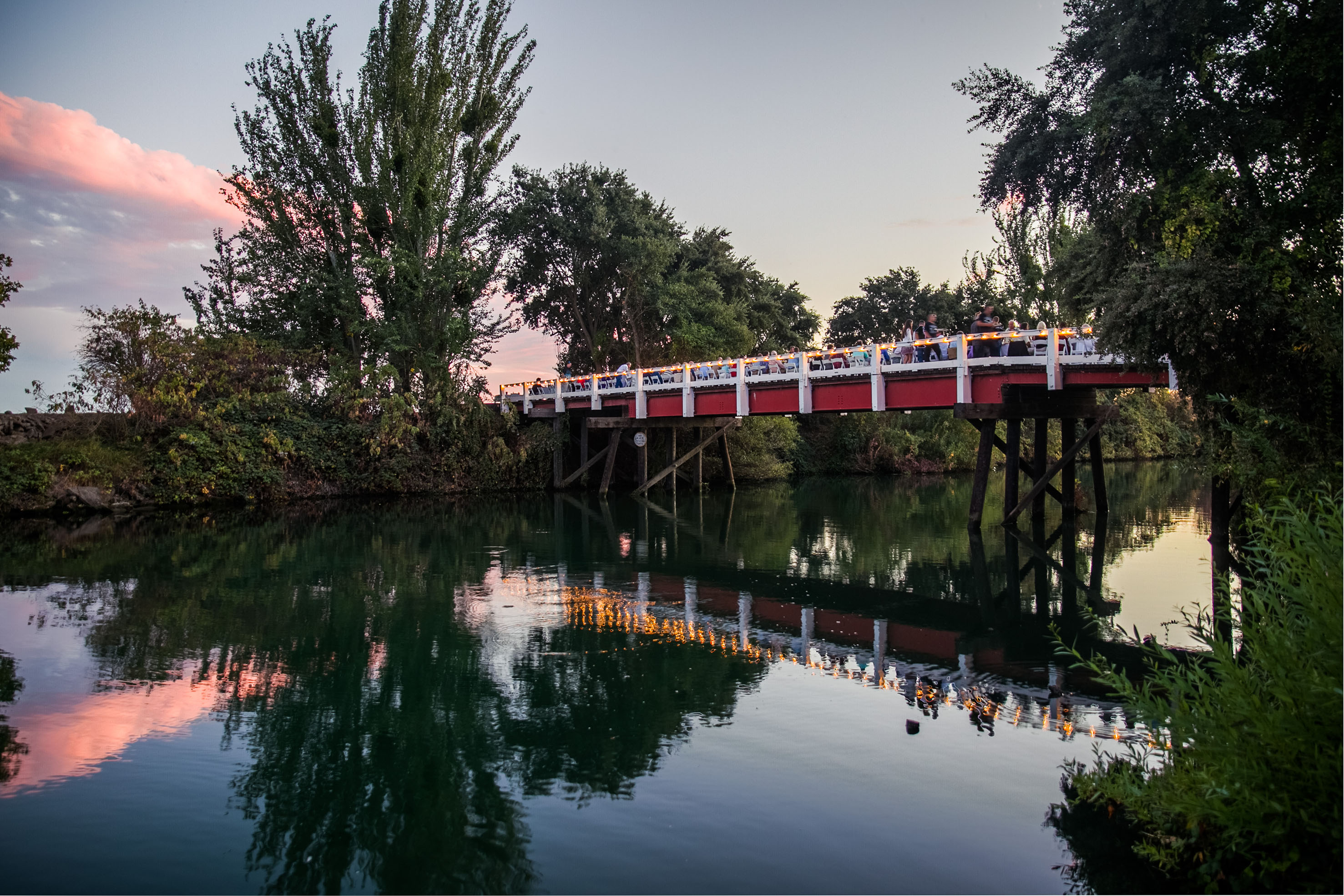 Sacramento, CA – “While all the hoopla was going on with the Tower Bridge Dinner downtown, I had a lovely evening on a picturesque bridge on the Delta,” writes Sacramento foodie Catherine Enfield in her recent blog post on her website at Munchie Musings.

Enfield joined 130 other people – including plenty of pear farmers –who attended the Pear Bridge Dinner held Sunday, September 27 by the California Pear Advisory Board in honor of the Farm-to-Fork movement in Sacramento and its surrounding rural communities.

Pear farmers are big Farm-to-Fork supporters because nearly all of the pears produced in the state are grown in or near Sacramento County. The Delta pear growing region, located just outside of Sacramento, is home to some oldest pear orchards in the country and the pear farming families who live there have been growing these pears on the same ground for generations.

“It occurred to me, as I sat among the local delta farmers and pear growers, that there needed to be more bridge dinners like this,” continues Enfield in her blog posting. “The Tower Bridge Dinner has become such a show piece with tables gobbled up by sponsors and VIPs and only a handful available to the public, only to be bought up in mere seconds. Here I was for an intimate dinner with farmers and I thought, what if each county or farm community put on its own bridge dinner? That way the people who really should be celebrating–the farmers– could enjoy this sort of harvest celebration together. “

By all accounts, the farmers did enjoy themselves as did all who attended this bridge dinner. Why not? There was a lot to enjoy from the Bosc Pear Martinis served by Bar Master Jay Yoon of Dawson’s Steakhouse in the Downtown Hyatt; Sudwerk’s beer from Davis, pear and gorgonzola-topped Murino pizzas from Hot Italian with wine from Bogle Vineyards of Clarksburg flowing freely all evening.

The meal was prepared by Mark Morais and his team from Giusti’s Place, located just across the river form the bridge. It featured all locally-grown foods including Delta Islands organic tomatoes, a salad of California Endive in Rio Vista, Dixon sweet corn and a delicious Barrel-Smoked Pork Rib Roast with Caramelized Pears. Following the main course, diners were served trays of dark chocolate crumbs, dessert pears and Fiscalini cheese provided by Golden State Fruit of Lodi.

The setting could not have been more picturesque with guests seated at one long table running the length of the bridge. The bridge was built in 1951 to connect the world with Deadhorse Island – named long ago as a place where retired workhorses could peacefully live out the rest of their days. Today, the island is home to cornfields and Dixie Wilson, 86, who built her home there in 1968. She was in attendance at the event along with her sons and grandchildren, who farm pears and other products in the Delta.

Between the local offerings enjoyed, the conversations shared and the incredible scenery viewed, the evening could not have been more perfect in its embodiment of the Farm-to-Fork spirit that strives to build bridges between farmers and the Sacramento community just up the river.

The California Pear Advisory Board was the first commodity program to sponsor the Farm-to-Fork effort.  The organization represents all California pear farmers, most of whom grow their products in Sacramento or nearby Lake or Mendocino counties. You can learn more about California pears at www.calpear.com