Make sure your Bartletts receive proper conditioning and handling for optimum sales and good shelf life. 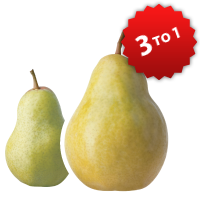 An eight-week study was recently conducted with two major retailers in a regional market. The study, which involved 40 stores in a “test vs. control” environment, was conducted during July and August — historically low average months for the pear category. Here are the key findings:

Consumers are very clear about what they’re looking for in the Bartletts they buy:

Consumers want pears with an appetizing appearance and ripeness. That’s why proper conditioning and handling of your California Bartlett Pears is so important. There are two ways to manage this critical task.