Called “a gift of the gods” by the Greek poet Homer, pears have been praised since ancient times. The early Romans developed over 50 pear varieties and spread them far and wide throughout Europe. Since then, hundreds more varieties have been introduced, the most popular being the Bartlett.

The Bartlett pear got its start in 17th Century England, originally known as the Williams pear before crossing the Atlantic with the early American colonists. Nurseryman Enoch Bartlett of Massachusetts, 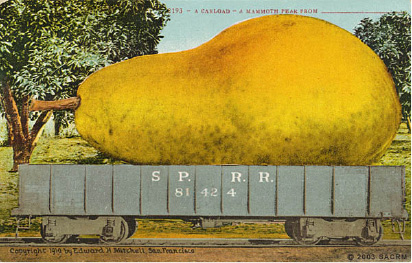 unaware of the pear’s true name, began distributing the variety under his own name in 1812 and it quickly became America’s favorite. By 1849, Bartlett pear trees had arrived in California, brought West by prospectors eager to strike it rich in the Gold Rush. Those who planted and farmed pears found their true fortunes in this golden fruit. With its Ideal climate and soils, California grew to be the nation’s supplier of pears as the first large-scale commercial fruit industry emerged. Many of the farming families who originally planted pears near Sacramento’s Gold Rush communities are still growing pears today. They farm on the same land that was planted with Bartlett pears generations ago.